A team of psychologists representing several universities has created an anti-racist training model for psychologists that will prepare them to dismantle racism in society, as opposed to only teaching coping skills to individuals. The team is also calling upon the psychology discipline to acknowledge the racist theories and practices in its history and the inequities they created.

While the training, called the Public Psychology for Liberation model, was designed for public psychologists – those who work in public settings – the team says it would have universal benefit for everyone in their discipline, regardless of field.

Educational psychology professor Nidia Ruedas-Gracia co-wrote the study, published in a special issue of the journal American Psychologist that focused on public psychology.

In a recently published paper, the team outlined the new training paradigm, saying that it challenges the “anti-Blackness, racial oppression and myths of white supremacy” embedded in society and “built uncritically into our training and discipline.”

“We want to transform with whom, what and how we teach, research and write by centering on the people most marginalized in society and the experiences and topics that they want to research,” said Helen A. Neville, a professor of educational psychology at the University of Illinois Urbana-Champaign and the first author of the paper.

The model also represents a commitment to provide mental health services in the public sector to, by and with some of the society’s most oppressed people. Grounded in the principles of liberation psychology – which emphasize collective well-being, consciousness of social injustices and resistance to the normalization of discrimination and oppression – the PPL model has the potential to transform community members’ lives, the team said.

“It includes centering social problems and the concerns of the global majority in our work and engaging diverse communities in knowledge creation from the very beginning to the very end,” said U. of I. educational psychology professor and co-author Nidia Ruedas-Gracia.

Doctoral student Amir H. Maghsoodi was a co-author of the study.

“Another part of public psychology is better communicating psychology knowledge. We have our journals that are oftentimes behind paywalls or embargoes, and we tend to keep that knowledge in this box and only open the door to certain people.”

Under the PPL model, psychologists and community members would codevelop and share relevant and accessible tools to promote healing and well-being, enabling marginalized populations to rise above systems of oppression and social isolation, according to the paper.

Historically, Western psychology – that practiced in North and South America and Europe – has “pathologized the individual” for the mental and emotional wounds inflicted by systemic racism, said co-author B. Andi Lee, a predoctoral candidate in clinical-community psychology.

“A lot of our treatments are so individually centered that they don’t take into consideration what might be causing unwellness,” Lee said. “People end up internalizing a lot of their struggles as ‘self-issues’ when really, they are natural responses to structural inequality and oppression. We end up teaching our clients to adapt to oppression rather than working to transform these surrounding conditions for liberation.” 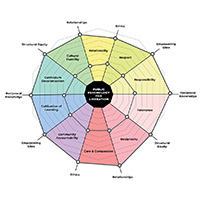 A spider web illustrates the interconnectedness of the skills and lifelong practices that compose the PPL training model.

Graphic by B. Andi Lee and Michael B. Vincent

Although their paper focused on the global majority – those who are Black, Indigenous or other people of color – team members said the framework they propose would apply to other groups in the U.S. that experience the greatest systemic oppression – the poor, immigrants, women from all backgrounds and those of diverse sexual and gender orientations.

The PPL training encompasses five foundational domains or areas of expertise to help psychologists develop capacities such as ethical consciousness, facilitating human and community relationships, and creating empowering learning sites – skills that would benefit colleagues in nearly all psychology fields, such as developmental and general psychology.

They also outline 10 lifelong practices – including relationality, which involves connections to family, the community and nature; responsibility to learn from and alongside people from the global majority; and respect for community members’ strengths and gifts.

Published in a special issue of the journal American Psychologist that explored the concept of public psychology, the paper called for substantive changes within the discipline of Western psychology itself – including its white- and Eurocentric-oriented perspectives.

In its current form, Western psychology is not a multicultural endeavor, said co-author Nimot Ogunfemi, a doctoral intern in counseling psychology at the university.

“When we start to include and really value the information from other communities, we have to welcome and be really open to different worldviews,” Ogunfemi said. “Often, there are similarities in these worldviews. As more people enter the space and find voice, we’ll begin to see that and experience these different approaches to psychology.”

Along with addressing the harms inflicted by societal injustice, the team suggested that Western psychology must confront its legacy of inequities such as those created and perpetuated through the eugenics movement and intelligence testing, Neville said.

“If at its roots the theories, perspectives and empirical research are designed to pathologize a group of people and to hold another group of people superior, it is reinforcing inequalities in society,” Neville said. “It’s so important that we transform ourselves in order to transform the discipline. And part of transforming ourselves is unlearning what we learned during our training in psychology.”